In Memory of a Pioneer in the Independent Living Movement 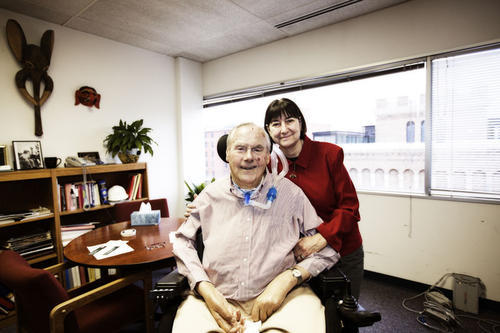 Max Starkloff, a longtime activist for disability rights and founder of Paraquad and the Starkloff Disability Institute, two local organizations that help disabled people live independently, died Monday morning of complications from the flu. He was 73.

Monday was the first workday he didn't report to his office the Starkloff Institute since its founding in 2003.

Cards and correspondence can be sent to the Starkloff home at 4446 Laclede Avenue, St. Louis, 63108. A funeral mass will take place on Tuesday, January 4, from 10 to 11:30 a.m. at St. Francis Xavier College Church at Saint Louis University (3628 Lindell Boulevard, St. Louis, 63108). It is open to the public. Visitation will immediately follow the mass until 2:30 p.m. in the Wool Ballroom on the lower level of the Busch Student Center across the street (20 North Grand Boulevard, St. Louis, 63108). Both buildings are accessible, though people with mobile disabilities should get to the church between 8:30 and 9:30 to allow time to be seated. There will also be a sign-language interpreter during the service.

Starkloff broke his neck in a car wreck in 1959, when he was 21. The doctors told him he would have only three days to live. Instead, the accident left him a quadriplegic. Initially, his mother took care of him at home, but after four years, he went into a nursing home.

"I was scared stiff," he recalled in a 2006 interview in St. Louis magazine.

My image was that I would never wear pants again. We found this place in Eureka run by the Franciscan brothers, St. Joseph Hill, and I remember Brother Dismas, this little bitty guy, saying to me on the first day, "You're not going to become our pet. We had another man who was a quad, and he became our pet." I was furious. They were condescending about everything. The minute you become disabled, people talk louder to you.

Starkloff lived in the nursing home for twelve years. He supplemented his formal education, which had ended when he flunked out of SLU High in 1954, with Kierkegaard and Camus. He learned to paint with a brush clenched between his teeth. He fell in love with a physical therapist named Colleen Kelly. And he worked out a plan for an independent living center, a place that would advocate for disabled people and help them live on their own.

"The greatest thing about Max was his creativity," says David Newburger, a lawyer, commissioner for the disabled of the city of St. Louis and one of Starkloff's closest friends. "He saw issues and things that today are obvious, but they weren't then. There he was, stuck in a nursing home, and he developed independently the idea that he would move out into the community, live in an apartment, marry his sweetheart and have a job. He didn't want to spend his life in a place where other people made the decisions for him. He was fiercely independent."

Paraquad, which Starkloff founded in 1970, was among the first independent living centers in the U.S. and the first in St. Louis. In 1975, as soon as Paraquad received its first grant for $5,000, Starkloff used the money to move out of the nursing home and asked Kelly to marry him. "She was his lifelong colleague," Newburger says. "They were together from the beginning."

Among other achievements, the Starkloffs and Paraquad introduced curb cuts and handicapped parking spaces to St. Louis, made St. Louis the first city in the country to have wheelchair lifts on public buses and fought to make more buildings accessible to disabled people. Starkloff co-founded the National Council on Independent Living and served as its first president, and he and Colleen lobbied for the Americans with Disabilities Act of 1990.

To understand just how significant all these changes were, take a look at Annie Zaleski's feature, "You think the Americans with Disabilities Act has leveled the playing field? Try walking in my shoes." Both Max and Colleen play a prominent role in Zaleski's story, discussing what it's like to be disabled in St. Louis, both pre-ADA and today.

"He was very capable," says Charlie Claggett, chairman of the board of the Starkloff Disability Institute. "After talking with him for 30 seconds, his disability faded into the background. He was so gently persistent. He really practiced what a friend of mine calls assertive humility. He'd keep gently pushing his agenda for people with disabilities."

The Starkloffs' influence extended far beyond St. Louis. In the 1990s, they traveled to Japan and were instrumental in building the independent living movement there.

In 2003, Max and Colleen left Paraquad and founded the Starkloff Disability Institute, which they called "the next big step" toward equal rights for disabled people.

"People have trouble envisioning how disabled people can have a job and live in a community," explains Newburger. "The Starkloff Disability Institute helps non-disabled people absorb the idea that it does work, that a person with a disability can work in their work group and live in their neighborhood. One thing that drives us nuts is the word 'special.' We're not special. We want to live and function as ordinary citizens."

Like most lifelong St. Louisans, Starkloff was a devoted Cardinals fan, but his favorite sport was basketball. He and his brother, a Jesuit priest and professor, were regulars at Saint Louis University Billikens games, where, Newburger says, "he had a mad old time. You know how funny those Jesuits can be."

Newburger chiefly remembers Starkloff's sense of humor. "He'd tell jokes about situations he got into," he says. "Non-disabled people were disturbed, but we'd live through them and think they were a riot. One time Max was in an elevator with a friend. The door shut and Max couldn't reach the button. Max was closer to the buttons, so his friend had to crawl over him to reach it. He'd tell this story and laugh. People don't get that our life is fun. He and I had a lot of fun."

Max Starkloff is survived by Colleen, a son and a daughter (another daughter was killed in a car accident in 2008) and four grandchildren. Of all his achievements, says Claggett, "Max was most proud of his family."

"When I told my six-year-old nephew Uncle Max had died," says Bridget Kelly, Starkloff's sister-in-law, "he cried. I asked him what was his favorite thing about Uncle Max. He said, 'Everything.'"

Colleen will remain an executive at the Starkloff Disability Institute.

Mayor Francis Slay said in a statement: "[Starkloff's] life was the stuff of a great movie....He was an example of living a full life as a person with a disability. The designs and operating practices of the City's public buildings, Metro, the St. Louis Zoo, and Busch Stadium reflect his advice, solicited and otherwise. He cannot be replaced, only remembered."

Board of Directors Login